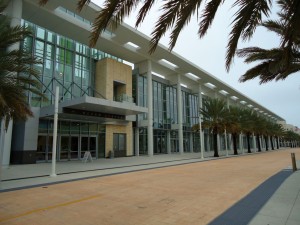 On Wednesday, 12.12.12, the Ocean Center on Daytona Beach was the location for a “Buy Local” expo, complete with several business-oriented presentations.

I happened to be there when a presentation for  developing an export strategy for Volusia County businesses was about to begin. Since I had spent a couple of years as the executive director of the Miami Foreign Trade Association, I was curious. because Volusia County doesn’t have a seaport, although the airport – small by Orlando and Miami standards – does operate Foreign Trade Zone #198. I wanted to see who the speakers were, and what they were going to talk about. 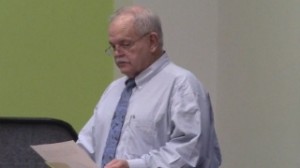 The first person I met was John Kizer, MPA. John was the moderator. Mr. Kizer works for Volusia County’s Division of Economic Development, charged with the task of “Business Retention.” During opening remarks, he pointed out the potential for companies in Volusia County to use the air capacity of Orlando International Airport and the ocean service of the Port of Jacksonville to reach new markets. Since I-95 and I-4 provide excellent ground connections, it would be possible, he pointed out, for items produced in Volusia County to be sold in Europe. But, he was quick to point out, there are a number of things that have to be done in order to achieve export success. 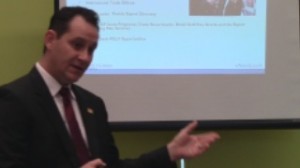 At that point, he turned the meeting over to Paul Mitchell, Regional Manager, International Trade Development for EnterpriseFlorida, the state’s economic development agency. Mr. Mitchell’s focus is on Aviation/Aerospace & Defense Trade Programs. It turns out that he was the international trade specialist for Volusia County Economic Development team prior to joining EnterpriseFlorida. In fact, Mr. Mitchell was involved in a 2008 Volusia County Division of Economic Developent funded by EnterpriseFlorida. The export initiative was in support of the Volusia County Manufacturers Association, which celebrated its 32nd Anniversary and Awards Banquet at the Daytona 500 Club on Thursday, 13 December 2012. 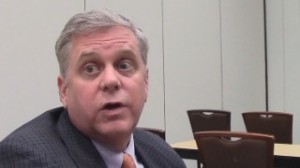 He emphasized the important role the state plays in match-making, through both in-bound and out-bound trade missions. 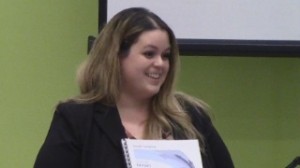 The final speaker was Nerine Elatter, CBA, an international trade specialist with Florida’s Small Business Development Center at the University of Central Florida. Nerine spoke about the research process and how the SBDC assists small business expand into the global marketplace. Like the other speakers, she was quick to point out exporting isn’t easy. And, it isn’t cheap. There are criteria that needs to be met before the SBDC can help.

Most of EnterpriseFlorida’s services are free to Florida businesses. There are several offices, each staffed by experienced individuals with a global persepective. Visit eFlorida.com for more information.

The presentation is part of a series to introduce a new program sponsored by EnterpriseFlorida and the Florida Small Business Development Center Network, in partnership with the U.S. Small Business Administration and the U.S. Commercial Service.

The program is, essentially, a scholarship to assist qualified Florida “new-to-export” manufacturers and service providers to identify overseas growth strategies through the development of a customized Export Marketing Plan. For more information call 1.866.737.7232.